Home Voice Of UAE Going, going, gone: A slice of Europe on Dubai’s doorstep. The Heart...

Going, going, gone: A slice of Europe on Dubai’s doorstep

Billionaire investors from Saudi Arabia are snapping up a slice of Europe — minutes from Dubai’s coast — as work on a luxurious man-made archipelago gathers pace.

On the emirate’s “The World” archipelago, the Heart of Europe project provides a series of island destinations, made up of opulent palaces, island villas and 13 luxury hotels on six small islands. Each offers a different aspect of European life and aims to bring European hospitality “with a Maldivian twist” to the Middle East’s Arabian Sea.

According to its developer, Joseph Kleindienst, chairman of the Dubai property developer Kleindienst Group, wealthy investors across the Kingdom are among the most prominent buyers of the multimillion-dollar properties being developed on the island, with almost a quarter of investments to date being made by Saudi nationals.

“We have a very good interest from Saudis in the Heart of Europe project,” said Kleindienst, speaking to Arab News during a private tour of Sweden Island.

“Here in Sweden Island, soon you will find very, very famous Saudi names. It is not for us to disclose these names, but later on, as the development grows, you will meet very interesting Saudis here.”

The Heart of Europe is the first big project to go ahead as part of The World project, a 60-square-kilometer archipelago of more than 200 islands laid out in the shape of a world map, which was created from millions of tons of sand and rock. Currently, Lebanon Island is the only one open to the public; it operates The World Island Beach Club.

Construction of the Heart of Europe project was due to begin in November 2008 but was delayed by the global financial crisis. Development finally began in 2014. The project’s value has grown from an initial Dh1.5 billion ($408 million) equity undertaking by Kleindienst Group to $5 billion after sales. 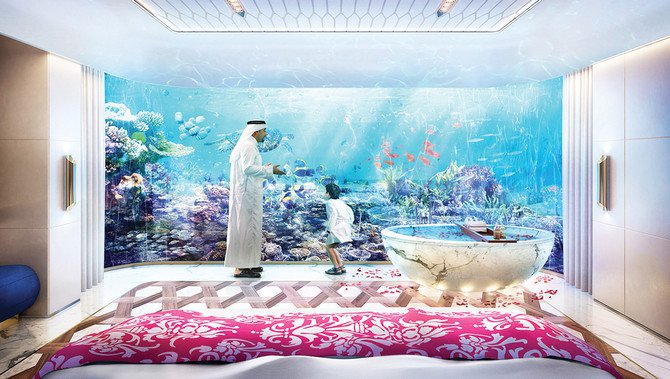 On Monday thousands of workers at Heart of Europe were busy across the islands striving to get the project ready in time for the completion deadline of 2020, ahead of Dubai’s Expo; with an initial focus on Germany Island and Sweden Island.

The Heart of Europe has 10 beach palaces on Sweden, 32 beach villas on Germany and 131 “Floating Seahorse” villas, marketed as the world’s “first luxury underwater living experience.”

Kleindienst expects that all of the homes for sale across the Heart of Europe project will be handed over by the end of this year.

In total there are 4,000 residential and hotel units that will eventually be available across the project, about 1,000 of which have already been bought by investors, Kleindienst revealed.

Besides handing over residences to owners by the end of the year, The Heart of Europe is slated to have the first of its planned hotel “soft openings,” at the Portofino Hotel in Italy, in December this year.

Lying about five kilometers (3.1 miles) off mainland Dubai, the Heart of Europe will feature classic Italian, Spanish, Swedish, Swiss and German architecture as well as landscaped gardens and streets that will, in some cases, feature artificial snow, due to advanced climate control technology. And, for those that miss the drizzly temperatures of Europe in the winter, some streets will also feature artificial rain. 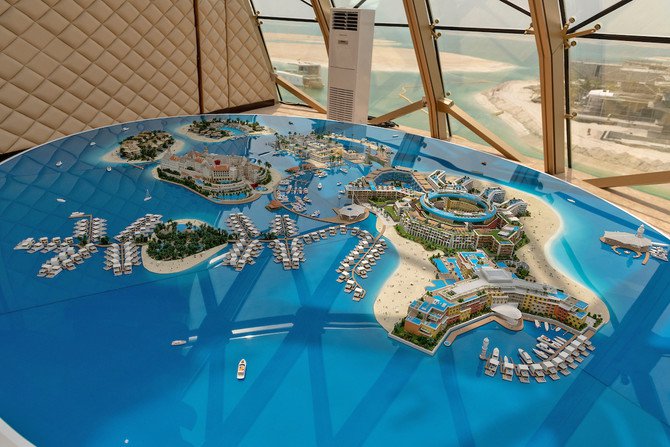 Sweden will feature 10 Scandinavian-style villas and, this week, the Kleindienst Group unveiled the first completed six-floor Sweden Beach Palace, which Arab News got a first look at.

With a price tag of Dh100million, the majestic villa comes fitted out Bentley Home interiors, equipped with seven plush bedrooms, a full gym and fitness center, an underground “snow room” that can be set as low as minus –5C, a Swedish massage room, an entertaining room and an observation deck — designed to mimic the upturned hull of a Viking boat — which provides 360-degree views of the Arabian Gulf.

Sweden will feature 10 villas in a Scandinavian style and, this week, the Kleindienst Group unveiled the first completed six-floor Sweden Beach Palace, which Arab News got a first look at.

With a price tag of Dh100million, the majestic villa comes fitted out Bentley Home interiors, equipped with seven plush bedrooms, a full gym and fitness centre, an underground “snow room” that can be set as low as minus –5C, a Swedish massage room, an entertaining room and an observation deck – designed to mimic the upturned hull of a Viking boat– which provides 360-degree views of the sprawling Arabian Gulf.

Each property has its own private section of beach. Uniquely the palaces fully-own a piece of the marine area plot, including a private coral reef.

Of the 10 that are for sale, three have already been bought by investors based in Saudi Arabia, said Kleindienst.

Saudis, along with other wealthy Middle Eastern residents, represent an important segment of the investors the Kleindienst Group are hoping to attract, he said.

“Saudi Arabia is a very important market for us,” he said. “It is an excellent product for investors from Saudi Arabia because we are selling this ‘second-home’ concept here in the Heart of Europe.

“People from Saudi Arabia can travel to Dubai and enjoy their time in the Heart of Europe. And when they are not here, we hope they can rent their homes out and produce an income from the property.”

Heart of Europe properties, Kleindienst stressed, are not for people to live in 365 days a year, but for the uber rich looking to snap up a second home in the Middle East, with a unique setting for the region.

He said that the project is Dubai’s first purpose-built luxury area in which UAE residents can own a holiday property in their own country, he said, rather than in the Maldives, Mauritius or the Seychelles.

“The second-home market is a new concept for Dubai,” he said, adding that while New York has places such as The Hamptons and multiple cities in Europe have countryside and seaside getaways, Dubai has lacked a luxury weekender destination.

“The Heart of Europe is a unique and ambitious project aiming to develop Dubai’s luxury freehold second-home market in an idyllic island location,” he said. “Our journey to date has taken us to the unveiling of the Sweden Beach Palaces, one of the most luxurious freehold second homes in the UAE. Our vision is turning into reality as we make real progress on our project.”

Aside from Sweden Island, Saudis are also snapping up the Floating Seahorse vessels, which come with a slightly less eye-watering price tag of Dh16million, said Kleindienst. Of the 131 for sale, 60 have already been purchased, he said. Figures from April show that about 40 percent of the buyers are from the Kingdom.

On the tour, Arab News saw a completed prototype. The bespoke one, two or three-bed floating homes have below sea-level bathrooms and bedrooms so owners have just a pane of glass separating them from hundreds of fish and an abundance of coral and marine life as they sleep and bathe. 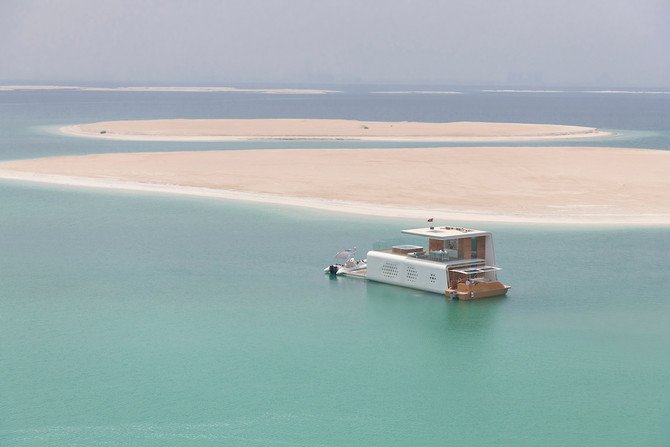 Kleindienst hopes the Heart of Europe project will be the catalyst for world-breaking firsts — including a record he aims to break this year.

The last quarter of 2018, he said, will see the soft opening of the 488-room Portofino Hotel, located on the Main Europe Island, despite only breaking ground on the construction site this year.

“No one has broken ground on a hotel then completed it the same year,” he said. “We want to show that it is possible. That anything is possible. That there is the ability to build a hotel in a year on an island.” 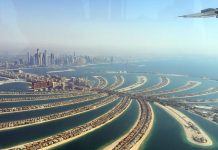 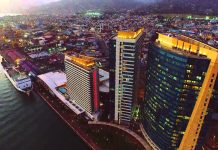 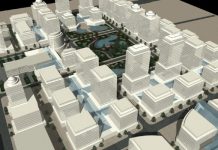